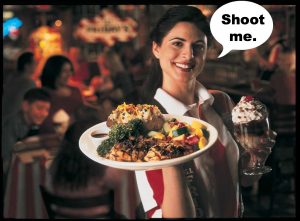 This week I happened to walk into a furniture store with a friend of mine and overheard the sales-person answer the phone. “Hi Sam here. How can I make living easier?” he said, and I was immediately thrust back nearly twenty years to when I worked in a Spur, and the managers wanted me rap along to an insipid birthday song and throw secret tribe hand-signs at the kids. (It turns out, by the way, that when a kid is chewing, shredding, and dumping their colouring-in paper on the carpet, and you know it will take 11 hours to pick it out after he has gone, giving him the middle-finger can’t be explained away as being the sign of the extra secret tribe).

Why do companies make their employees do these things? I can’t name a single person above the age of three who thinks having a birthday song sung to them by a group of minimum wage employees, who are fully aware that they aren’t singing “Happy Birthday” simply because the company is afraid of copyright infringements, is fun. Historically the only people who enjoyed watching the poor undergo ritual humiliation for their amusement while they are eating are billionaire slave-plantation owners and, if you factor in the old-timey American racism of the Spur restaurant theme, we know exactly what they are doing in the modern era.

The thing is these birthday songs, slogans, and phone answering techniques, aren’t the way to make a genuine connection with your customer. Shortly after I heard Sam answer the phone in that contrived fashion I realised the look of mixed disgust and shame that I had shot him was the same one I would get from parents whenever I fired off the secret tribe sign. They are so awful and humiliating that my friends, and I use this word lightly, would regularly come into the Spur when I was on shift, tell the manager it was their birthday, and try to see me singing the birthday song. The joke was on them however as during the birthday songs I was always hidden in the kitchen supplementing my crappy wage by devouring uneaten food. It wasn’t my proudest four months.

Do you really want to learn “how to make living easier”? Stop making your employees belt out fatuous rubbish at your customers. We all know they aren’t happy saying, and doing them, so their being forced to pretend otherwise is just dishonest. I for one would much rather be served my bad steak by a normal person who doesn’t caper like a goat on Redbull at Disneyworld than become an unwilling participant in your charade of lies.