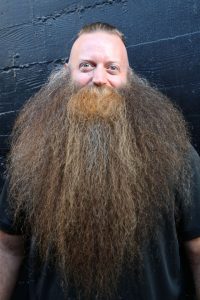 When I left school I grew my hair. It was long and luscious and exactly the kind of thing my son will laugh at loudly when he sees the pictures. It was the 90s and everyone I knew left their schools and immediately started trying to look like they were homeless. I however did not. My first year at university was spent clean cut, with the same short style I had during my school years. This was intentional. I didn’t want people thinking I was going with the crowd, when in fact I very much wanted to go with the crowd. Toward the end of first year the excitement became too much and I started letting my hair grow out. The point was that it has always been important to me that I not fall into the trap of becoming a stereotype. Turning 39 and at the same time realising I am undergoing a midlife crisis has therefore been extremely annoying.

I know I am going through a midlife crisis, because I have started to think about growing a beard for the first time in my life. I don’t mean one of those neatly trimmed, and oiled hipster beards, but rather a kind of untamed jungle beard.  I want a shaggy monstrosity that I occasionally take a kitchen knife to and hack back like a wild vine. Or rather I don’t want one, because that is what’s expected of me at 39, shortly after a divorce, and I will be damned if I meet society’s expectations.

Knowing I am probably undergoing some kind of mid-life crisis is very enlightening however. It means I can choose the direction I want to take it in. I don’t necessarily have to grow a beard. Rather than unknowingly plunging myself into an extra-marital affair, taking up drugs or purchasing a stupidly expensive motorbike, I could be looking at this as an opportunity to position my life well for the next 39 years. Last night I made a mental note to buy more Weet-bix for the fibre. I am also considering studying something, and taking up the piano again.

On the other hand, there is always the beard. As far as I see it growing a beard now has many benefits and only one con. If I grow a Hagrid beard strangers will probably assume I am either a murderer or belong to a cult. People I don’t even know would likely fear me, or go out of their way to avoid me. It would be wonderful. Other benefits include not being able to see my face accurately in the mirror, and having an excuse for why no one wants to sleep with me. The con is of course that my toddler son may no longer recognise me, but I am sure he will understand when I tell him the “hedge who is his dad” is saving literally tens of Rands on shaving stuff each month.

By this time next year we will all know which path I took. Will I be on the path to self-fulfilment, riches and happiness, or will I have a beard. Who knows? I live in exciting times.

One Reply to “The Midlife Crisis Beard”