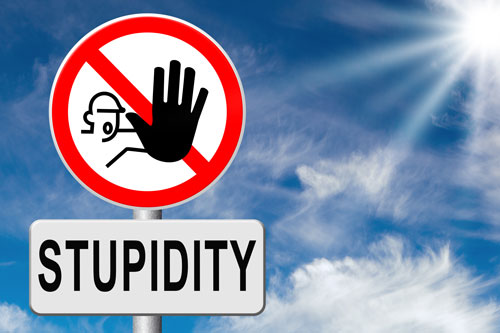 One of my biggest problems I have realised is that I expect too much from humanity. My natural inclination is to assume that anyone I meet, and people I speak to, are rational, thinking, and reasonable people. When I put it to paper – website – like this I realise how foolish such a notion seems, but I can’t seem to help myself when I am out there in the world.  In my experience the great-majority of those people (the readers of this column exempted) haven’t got the sense to scratch their balls without first consulting a Youtube video.

This is of course alright. It’s absolutely okay to be the kind of person who eats corn flakes by stabbing at them with a fork. It’s something that could have happened to anyone at birth, but I shouldn’t expect the people I meet to be anything other than that. I could save myself endless hours of frustration if I just lowered my expectations of those around me. Harnessing this great power could see me breeze through traffic, smile benignly as the old woman in front of me in the Pick n Pay queue counts her coins for the fiftieth time, and sigh serenely as I hang up on call centre salespeople. At the core of this realisation is that I am seldom irritated with animals. Dogs are stupid. They spend most of their time walking in circles in an attempt to sniff each other’s behinds. The most one can expect from a dog is that it doesn’t poo on the carpet, however because my expectations of them are limited I rarely find myself frustrated. On the other hand I tend to expect so much more from the people than that they simply do “their business” outside, and this leads to disappointment.  For starters I used a public toilet the other day, and discovered that someone had in fact done their business outside the toilet. Cue existential despair.

Probably one of my favourite examples of epic stupidity occurred when in a moment of youthful exhuberance I accidentally found myself at a Boksburg nightclub I now believe was called Masquerades. I was confronted at the bar by a large bald headed man who told me that he “headbutted concrete pillars”. I smiled and asked, “Why?”, with a look on his face bordering on condescension he said, “For fun”. To which I replied, “You have had a lot of fun this way” taking my life in my hands. Naturally he laughed, said “Ja!” before smashing his head against a concrete pillar.

Lowering one’s expectations in these situations is admittedly easier said than done, but I have at least found another angle to understanding those among us who are so simple they believe white privilege isn’t real, but white genocide is.  A 2012 study led by Richard West at James Madison University reveals the stupidity that resides in each and every one us, by indicating our numerous thinking biases and errors.  Among a series of questions he uses to reveal these biases is this one:  A bat and ball cost a dollar and ten cents. The bat costs a dollar more than the ball. How much does the ball cost?

Naturally most people respond that the bat is a dollar, and the ball ten cents. This is incorrect. The real answer is that the ball is 5c and the bat is $1.05. It’s what West called a thinking bias, a quick route our brain has been trained to take over time, that we use because it’s simply easier than doing the actual maths. These biases affect every facet of our lives, and are there to give us quick shortcuts to save time in our day-to-day lives. One of the most powerful of these is called the “self-serving bias” in which we tend to think we are better than others.  Most people for instance believe they are above average in intelligence – even whose who think that vaccinations cause autism.

West further found that we are amazingly good at spotting when others make these errors and are terrible at recognising them in ourselves.  The reason for this is that we judge others logically and based purely on their actions, while when judging our own behaviours we factor in emotion, motivations and intentions. In each instance, we readily forgive ourselves our mistakes, but look harshly upon those of other people. And it gets worse. The study further found that the more traditionally intelligent a person is (the more “cognitively sophisticated”) the more likely they are to make these errors. Essentially: we are all dumber than we think we are, and even if we aren’t, that just means we make more mistakes.

Of course while this does explain some of the daily stupidities we are all made to endure, and  allows us to climb down off our high-horses and view the perpetrators in a kinder light leading to peace and forgiveness, I still think the guy who did a poo on the floor of the Douglasdale shell garage right by the hand-dryer is an asshole.